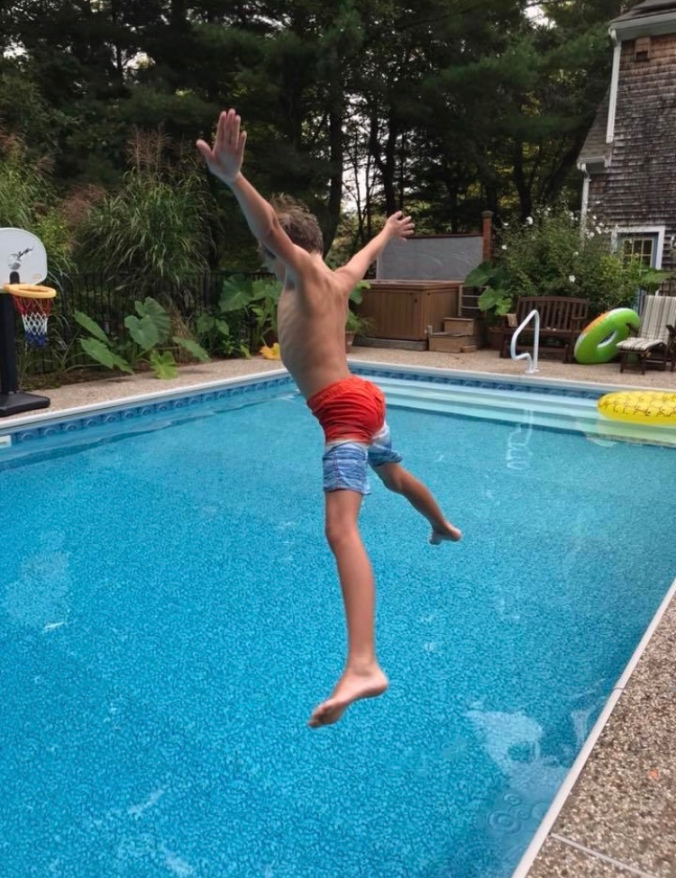 Remember when your mother told you to be nice to your brother? It’s because a gypsy once came to the house, offering to buy you, but your brother wouldn’t let her sell you.

That one came from a friend, but I can certainly remember a lot of stuff my mom (and grandma and aunts) told me and my brother and my cousins to either scare us or simply manipulate our behavior.

“Put on a jacket or you’ll catch cold!” Or the closely related, “Put on a hat or you’ll get sick!” or even “Don’t go outside with wet hair or you’ll catch pneumonia!” This must be the Most Perpetuated Mom-Myth around. It’s been passed down like a family heirloom; generations upon generations have been saying this to their kids. Therefore, it must be true. Science? Bah, science! What’s that?

“Don’t sit on the cold/damp ground- you’ll get piles!” The tone with which my mother uttered this phrase was enough to make me not do it, but it took me awhile to ask her what piles were.

“Diarrhea,” was her simple reply.

And then every time I was so afflicted as a child I would try to think of the most recent time I’d sat on the cold ground, thinking that must have been what caused this.

“Eat the crusts of the bread- all the nutrients are in there!” Or “Eat the crusts of your sandwich- it will give you curly hair!” The former was uttered by countless Moms I knew growing up. The latter was something my aunt used to say to me. Unfortunately it had the opposite effect. I didn’t want curly hair. I remember staring at the remaining crusts of my peanut butter sandwich, holding back tears (I was a very sensitive child). My cousins had already been excused from the table to go and play, and I was the last one sitting there. My hair was already quite wavy and unruly, with little wisps that refused to stay back in a sleek ponytail- like every other girl could seem to manage. I didn’t want to risk getting more curls. Please don’t make me eat this, I thought miserably.

My girl friend’s dad suggested eating the crusts would put hair on her chest. “Why he ever thought that would be appealing to me is unclear,” she’d said.

The Second Most Perpetuated Mom-Myth of my childhood has to be the ol “you can’t go swimming for at least an hour after you eat or you’ll get cramps and drown.” The Moms/Aunts even offered some semblance of science saying that the blood flow to our digestive system increased after eating so that meant less blood to our limbs for swimming. Phrases like “blood flow” and “digestive system” sound scary and very authoritative to 5 year olds, so we obliged. They also locked the pool gate (or ladder) and went inside to catch up on “One Life to Live” while we “digested.”

About jellyfish stings… not that anyone in my family would actually have been willing to pee on another one to alleviate the pain from a sting, but a small part of me did wonder if, in fact, there was any truth to this. My mom however, was convinced that putting meat tenderizer on a jellyfish sting would bring instant relief.

I cannot remember if this worked, but a search on The Google revealed a few sites that say, Yes, meat tenderizer can provide relief from a jellyfish sting.

People love to predict things and then be proven correct, am I right? My mom would love it if I presented her with the meat tenderizer proof.

Each time I was pregnant (three times), I didn’t want to find out the sex of the baby. This caused no small amount of annoyance and frustration among many of my older friends and relatives who couldn’t understand WHY I wouldn’t want to know. Anyway, they delighted in predicting the sex of the baby, each time, depending on “how I was carrying.” About fifty percent of them guessed correctly, which would have been roughly the same percentage if they had guessed- 2 or 3 months out- whether it would rain or not the day I delivered. I carried all three babies essentially the same way. I have two girls and one boy. So there.

When my cousins and I were young, we’d all “help” during Spring Cleanup at Gram’s house. For the adults it meant lots of weeding, raking, hauling branches and brush. For the kids, it was basically a giant playdate as long as we didn’t get in the way. Every year I remember my mom and at least one aunt cautioning us not to wear yellow shirts, or “the bees will bother you!” I was quite afraid of bees, so I heeded this warning with special care.

“Don’t crack your knuckles or you’ll get arthritis,” was another oft-repeated tale. This one actually scared me. Whenever I would accompany my mom to visit one of my great aunts, I would silently stare at their gnarled and crooked fingers (as if the hard undisputed truth was being presented) and wonder how often they cracked their knuckles when they were younger. Middle Daughter cracks her knuckles constantly, and the sound of it is actually uncomfortable for me.

Moms seemed overly concerned about our eyes and eyesight. While I never truly believed that my eyes would “get stuck that way” if I crossed them, there was this nagging voice in the back of my head… Moving my eyes is a muscle movement, muscles can “stretch out” (like a hair elastic… don’t ask me where this logic came from), maybe it’s possible that my eyes will become “too loose” if I cross them too much. Actually it was just uncomfortable and gave me kind of a headache, so I didn’t really see the draw in doing it.

“Don’t sit so close to the TV- you’ll damage your eyes!” (Or even go blind?) Where in the world did they come up with this stuff?

I’m sure we were all told as children that eating carrots would give us great eyesight. As proof we were offered… rabbits? “You’ve never seen a blind rabbit have you?” has been uttered more than once by the adults in my life. As if this were the end of any dispute, because all the wild bunnies running around…have ready access to carrots as the mainstay of their diet…? I’m afraid to say that Bugs Bunny may have been considered our “scientific evidence.”

What I eventually learned in school helped me realize that there is a contributing factor, but it’s certainly not the cause and effect our parents made it out to be.

But, if you have kids and you haven’t told a white lie or stretched the truth to get them to eat their veggies, are you even parenting??

Some might call it manipulative, but after being a parent for almost 20 years, I might even go so far as to say that repeating or making up Old Wives Tales is a parenting tool. (Along with bribery, of course… I mean, extrinsic motivation techniques.) I may or may not have repeated at least two of these tales to my kids when they were young. I’ll leave it to you to guess which ones.

One thought on “Old Wives Tales”