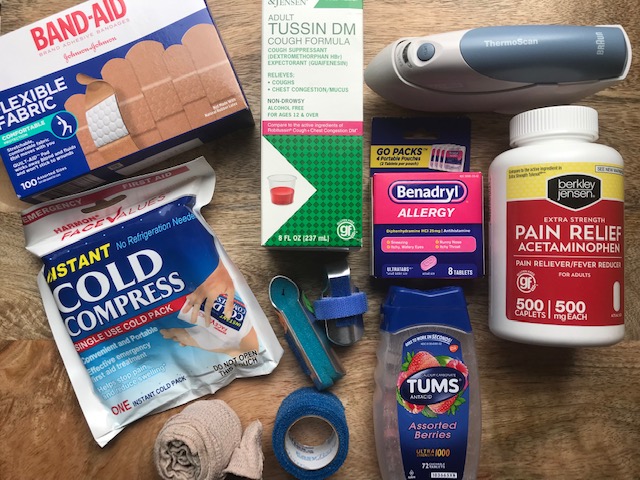 If you’re a parent of children who are old enough to communicate, chances are you’ve said this phrase to them more times than you can count.   Falls, scrapes, scratches, bumps, bruises, bug bites… sometimes our kids complain so much that we become immune to it.  It’s a parenthood survival coping mechanism, I think.

It doesn’t start out this way though.   When I was a new mom, I would run with outstretched arms every time my daughter took a spill and cried.  I learned over time that my kid was not very graceful, would routinely trip over things and walk into door jambs. I learned that as a whole, kids are very resilient and kind of “bendy.”  So by the time she was almost five, if she fell, I would wait a minute to see if the crying would abate or decrease in intensity.   This probably explains my reaction to her falling into the cubbies at Pre-K and smacking her shoulder.

“Oh, you’re FINE!  Let’s put some ice on it,” I’d said.  We went out to recess, she seemed to recover, handed me the ice pack and went to join her friends. Then she came back screaming, “Mommy! I went to climb the ladder and I HEARD MY BONE SNAP!”  An ambulance ride to the ER and x-rays confirmed a broken collarbone.

Some years later when the school nurse called me to say that Middle Daughter fell from the monkey bars and there’s a good chance her arm was broken, I listened and took her in right away.  (It was broken.) But honestly, if it were just me at the playground with her, I cannot confirm or deny that I would maybe, possibly, might have just said, “Oh, you’re FINE!”

I posed the question to my parent friends, tell me your best #parentoftheyear stories, when you have said those very three words to your child, only to have eaten them shortly afterward.  Oh, I got some good stories.  The good thing is, that all of our kids lived to tell the tale.  The best thing is, I AM NOT ALONE.

Erin’s daughter complained that she hurt her ankle jumping into the foam pit at gymnastics.  I could just hear Erin’s voice in my head, “Oh, the FOAM PIT?  Really??! You’re FINE!”  Three weeks later, the ankle still hurt, a doctor visit confirmed a sprain that required three weeks in an air cast.  Oops.

Linda’s daughter was a soccer goalie, blocked a shot and hurt her finger. Mom said, “oh it’s just sprained.”  Actually, it was broken.

Tracy’s daughter complained that someone stepped on her foot after school.  She limped around for several days before mom reluctantly took her to the doctor.  It was broken, and she had to not only wear a boot for two months, but go back for subsequent x-rays. Oops.

It’s hard to be the Administrator of Tough Love in the house.  It’s hard to hear our kids cry.  But on some level, we also don’t want them to turn into hypochondriacs, overreacting to every little bruise and stomachache.

Oh, the stomachaches.  Those are the hardest.  How much complaining is too much complaining? Is it “first day of school” stomachache?  Or is it “my teacher is doing hard math today” stomachache?  Sometimes our kids deal with genuine anxiety issues, but until we have the benefit of hindsight, or there’s a concerning pattern, we just have to trust our mom-intuition and deal with the day-to-day stuff as it comes.

Like when Kerri’s daughter complained of stomach pain that Mom attributed to her lactose-intolerance.  Even when her daughter said she’d seen serious symptoms like hers on “Gray’s Anatomy” she couldn’t elicit anything more from mom than “Oh you’re FINE,” and off to school. Within a day, however, she was in surgery for appendicitis.

That’s not the only appendicitis story I’d heard.  Chrissy’s daughter had been having some stomach pain for a few days, and mom had said, “Oh take a Tums and we will talk in the morning.”  When 3 am rolled around and her daughter woke her up because she was Googling her symptoms and in tremendous pain, she also ended up in the ER.

And then there are the garden-variety colds.  Let’s face it, kids are basically walking petri dishes: classrooms, cafeterias, school buses, the gym, after school activities…  do we keep them home every time they sniffle?  I know unless the thermometer rises significantly, I offer four forms of basic advice: wash your hands, stay hydrated, get enough sleep, and Suck It Up.

So really it’s no surprise after dealing with the eleventeenth cold/virus of the barely half-over school year, Sheri said to her middle daughter, “Oh you’re fine, you just have a cold,” when she had complained to her mom that “it’s hard to breathe and my chest hurts.”  A trip to the ER shortly after that exchange diagnosed pneumonia with the highest white blood cell count the hospital had seen in a child that was responsive… except, oops, nope, she became barely responsive after that.

And who could blame Amy when she sent her son to school with a sore throat, but there was no fever? “I think I have strep,” he’d said.  “It’s allergies,” she’d said.  Oops, nope, it was strep.

Then sometimes, there are the instances where we parents just make mistakes.  It may be that we’re so hyper-focused on the minutia of the day that we don’t stop to see the big picture. Or maybe we’re so focused on the Big Event of the Day that we let important details slip (see “Photo Fail”).  Either way, parents often just have way too much going on in their brains at any given moment.

Which explains why my friend accidentally gave her youngest stroller-age daughter a dog sedative instead of her fluoride vitamin.  The little one slept through her sister’s field trip, and Mom came home to find a very active dog.  In fact, that *may* have been the day the dog found his way to the roof from a second story window.

Sometimes the “Oh you’re FINE” gets you into the “What’s Grosser than Gross?” category.  Like when Cate’s son seemingly developed a bad case of “bug bites” that got progressively worse over the course of a week.  Turns out it was scabies from shared Little League equipment.  (Put that on your To Do List: purchase helmet.)

Kara’s son definitely wins the “What’s Grosser than Gross?” category with a picture of his finger after being slammed in the closet door.  My husband, the physician, described it as a “major crush injury,” but it looked like the tip of his finger was soaked in Crayola Black ink for a solid day.  Actually, it looked DEAD.  Even though it didn’t look like that upon their visit to Urgent Care, or during x-rays… they were at a hand specialist and surgery the next day.

For every story of a Mom or Parent Fail though, there are at least ten or twenty stories of the over reactive kid who convinces his/her mom that something “really serious” is going on.   Enter the tween/teenage years:  Master Manipulators, plus drama and hormones and the general “under construction-rewiring” of the teenage brain… the Perfect Storm is brewing.

How many of you have made an appointment with the doctor because your teen daughter fell or landed on her ankle wrong and swore it was THE WORST PAIN EVER AND THERE’S NO WAY I CAN WALK ON THIS?

And if you didn’t rush to the doctor, how much money did you spend at CVS looking for the right wrap, splint, brace, or athletic tape to fit the ankle/wrist/knee to garner the appropriate amount of sympathy from family/friends/coaches/teachers?

Do we every truly get rid of the Mom Guilt that accompanies most of these stories? Wait, I’ll answer that for you. No. No, we don’t. It lessens to a degree over time, but as I started out saying, all our kids lived through this. And they are always there to remind us. Over. And over again.

Laurie, a nurse, will never forget the long weekend when she’d worked three 12-hour shifts in a row and had to stay awake the next day because the kids had off from school. She fell asleep on the couch by 4:00 (who wouldn’t have?) and woke up to yelling- her husband found the kids down the street on their bikes with bags of clothes tied to the handle bars.

Brenda still feels guilty about the time her then 10 year old daughter was bucked off her horse and fell on her arm.  Mom and the trainer both said, “You’re fine. You need to get back on that horse.” The next day a trip to the ER showed she had broken the radial head near her elbow.

Another mom told me how she was laughing to her friend about how her daughter has a funny way of running.  “Look at her! She’s runs so funny!”  they’d giggled.  And then she found out her daughter has a legitimate leg-length discrepancy.

Middle Daughter will forever remind me of the time I sent her to school with a concussion.  In my defense, we’d left the ER with no direct instructions to keep her home, and none of my other kids had ever had a concussion before… I didn’t know there were checklists and protocols and many follow-up visits.

The things we say to our kids lead us on this crazy cycle of Trust/Distrust/Guilt. They trust us when we say “you’re fine.” We trust that they really are.   Then they distrust us when they aren’t, we distrust our instincts, we feel guilty, they make us feel guilty.  We’re all of us battered and bruised emotionally by the time the ordeal is over.

Laurie said to her teen son after he landed poorly, crowd-surfing at a punk rock concert, “Shake it off!” As she put it, he *may* have broken a bone in his foot.

Someone fell on Karianne’s daughter’s foot in the school gym.  When she complained that it “hurt really bad,” Mom said, “Suck it up- be tough!”  Two days later, Mom reluctantly took her to the doctor, and she spent four months in a boot for a fracture.

Niki’s son had a basketball ricochet off the backboard and hit him in the thumb.  Her litany of “Oh you’re fine. Suck it up. Rub some dirt in it,” has my vote for favorite phrase.  Of course it was broken.

And Tava, a nurse, just about flat-out refused to take her son to the ER on Memorial Day when he’d fallen out of bed and hurt his wrist.  And then it kept swelling… turned out he’d broken both bones and needed a cast.

If you’ve reached the end of this blog without skipping any paragraphs, then I both congratulate you and thank you.  I included so many personal anecdotes here because they made me laugh, but mostly because it made me feel better about myself. I am not alone.  We are not alone.  Our kids will live through this.  Mostly, they will live to remind us of these stories.

I wish I could impart some valuable Words of Wisdom on the Great Lessons I Have Learned as a Parent regarding this.  But I can’t.  I can only say that it will probably happen again. To one of my kids.  Or all three.