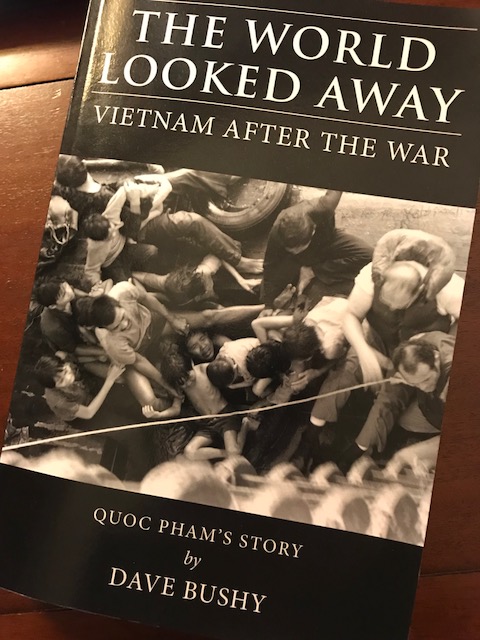 I don’t know much about the Vietnam War except what’s been written in U.S. history textbooks.  I am not a history buff.  I know what my Dad, a veteran, has chosen to tell me, and that’s very little. I know it was a war that divided generations of Americans, many stuck in their own righteous beliefs, brought on by circumstance or experience.

Today I met a man, a former South Vietnamese naval officer, who said, “The Americans were there (in Vietnam) for the right reasons.  We were glad they were there.  They were helping defend us (South Vietnamese people) from the invaders from the North (Communist soldiers from North Vietnam).”

At the risk of over-simplifying things…when the United States pulled its soldiers out of Vietnam in 1973, the war was over for us.  For the people of South Vietnam, things were going to get worse.  The Communist North took over South Vietnam in April of 1975, and anyone who served in any capacity in the South Vietnamese army or navy was considered a criminal and a traitor.  Without question and without exception. For years.

I met a man who was sent to a Communist “Reeducation Camp” for what was supposed to be ten days.  It was forced hard labor, torture, and deprivation, and he was there for four years. Many others were imprisoned for three times as long.

I met a man who was treated like no human should ever be treated, suffering humiliation, starvation, and brutality every day of those four years.

I met a man who forgave the people who treated him as if he were less than human.  Forgiveness like that is awe-inspiring and powerful .

I met a man who refused to let hate and feelings of revenge live in his heart. A man who captained a boat with 55 refugees, survived a perilous journey, who finally escaped Vietnam, only to have to wait nine years to be reunited with his wife and children.

I met a man, who, through it all, never lost hope.

I have no experiences in my life that could help me relate to anything Quoc Pham went through.  But I believe in the power of stories to connect people, across distance and differences.

My three children watched me read this book over the last few weeks and would frequently ask me, “Mom, are you okay? What’s wrong?”  I could not adequately explain to them why I was moved to tears so many times during Dave Bushy’s story about Quoc Pham.

We are not children of war, or victims of an oppressive Communist government.  We teach our children to be grateful for the things we have though, and the people in our lives.  But after reading a story like Quoc’s, it is almost as if there is a missing depth to our gratitude.

I consider myself to be a story teller, but likewise I consider myself a story collector.  Each story I read opens a new perspective in me.  I am still me, but I am also something a tiny bit more.

For that I am grateful.

Thank you, Quoc Pham, for sharing your story.  Thank you, Dave Bushy, for writing that story for the world to read.

2 thoughts on “The Story”